You are cordially invited to a Gala Concert  of varied culture in Christ the King , Alfreton DE55 7GL  parish centre , on Saturday November 5th at 19.45. Headlining the night is legendary Irish Comedian Jimmy Cricket. Well known in the East Midlands  Kellys Heroes will have your feet tapping with their array of Irish ballads, jigs and reels. We will also have displays of Indian and Polish dancing/singing  from our parishioners and from Nottingham singer and songwriter Louie Walsh, will be on stage .
Proceeds from the night are being sent to + Bishop John Ryan,  diocese of Mzuzu, Africa , to purchase desks for the school in St. Monica parish in his diocese, pupils currently sitting on the floor. We will also be sending school stationery, already collected from kind donations. Tickets £10 and can be reserved by texting your surname to 07772471894 or pay on the door Nov 5th. Gerry Molumby (organiser)
Poster and Press Release Charity Concert November 5th 2022 Christ the King.pub

The Hostage by Brendan Behan presented by Triskellion Theatre for two week ‘run’ at Aras na Gael, Kilburn  in June 1996 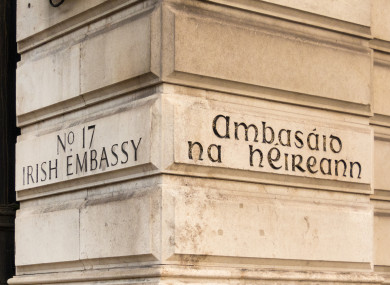 Centered on the life of the daughter of James Joyce and Nora Barnacle.

Letters to Lucia is an original drama featuring letters as they might have been written to James Joyce’s daughter Lucia by those who knew her well. These correspondents include her parents and the writer Samuel Beckett who visited her at St Andrews, the Northampton hospital where she ended her days.

In the unique setting of the cemetery where Lucia is buried, her friends and family express thoughts and feelings they perhaps wished they could have articulated during Lucia’s lifetime, but for various reasons did not.

From an original idea by Richard Rose, the drama was developed in collaboration with playwright James Vollmar and the Triskellion  Irish Theatre Company. Cast of James Joyce, Nora Barnacle, Samuel Beckett, Frank Budgen, and Kathleen Neel.

This  new play will be  performed for the first time  on Bloomsday (June 16th 2018 @ 2.30pm) at her graveside, Kingsthorpe, Northampton.  Our 14th year !. Bring a chair and light picnic !.Also buried here are Donall Mac Amhlaigh (Irish in Britain Writer) and Violet Gibson (The Irishwoman Who Shot Mussolini)

‘Be ye a telling’ The stories of Seanachi Eamon Kelly back on stage again by Gerry Molumby.

In 2013 Gerry Molumby won the Midlandls and Comhaltas  UK 1st place in Storytelling. Back then ‘Storytelling’ did not feature in Fleadh Cheoil na hÉireann. Since then the place of storytelling in Irish Culture has been reinstated and now it is part of the the world wide competitions of Fleadh Cheoil.

Gerry is taking to the road again with his many years of enjoying Irish Storytelling with audiences. Contact Gerry via fmolumby@aol.com.

The  highlight of the Celtic and Irish Cultural Society’s year is their  Crawley Irish Festival held on the Sunday of the August Bank Holiday.  Here John and Noreen Nolan and committee  attracted  over 6,000 people featuring a number of Irish arts workshops, Irish dancing demonstrations, three music stages featuring traditional and modern Irish music, All Ireland Gaelic Football Semi- Final ‘beamed’ from Croke Park, children’s entertainment and storytelling, craft stalls and shops selling traditional Irish produce etc.  This year’s festival proved a great success with a Sky TV crew down to record the happenings for the ‘Irish in the UK’ Tv show.  The programme can be viewed on youtube at

Throughout the year as part of Crawley Fleadh with support from Crawley Council  and the Hawth Theatre they endeavour to host other activities such as educational and performance events to showcase further our rich and varied Culture.  Following on from our very successful and well received ‘One Easter Morn’ (2016 Commemoration ) held last year we are hosting a night of Irish Drama, Music, Story and Song on Friday 3rd November at 7. 45 at the Hawth Theatre.

They  are especially pleased to be bringing over from Co. Kildare, The Hy- Breasal Theatre Company as the highlight of the night as they present  ‘Backwater’, Classic Irish Drama by John B Keane . ‘Backwater’ is a rarely seen John B. Keane one-act play which was first performed in 1973. It tells the story of Jimmy Swan, an only son who arrives home to Ireland from London to visit his mother after a nine year absence.  His visit coincides with the annual carnival in the village and he brings his two friends, Sammy and Eddie to stay for the ten days of the carnival.  Jimmy’s arrival triggers a series of events that neither he nor his mother could have foreseen.

Backwater by John B Keane

The rest of the evening will be a showcase of Irish Dancing from the Ace Academy and traditional music from the local band Strawdogs. This is being  produced in collaboration with Gerry Molumby from Triskellion Theatre who will also perform part of his one man show ‘Tar Isteach’.

Over the years we have on occasion professionally filmed some of our plays and concerts. The plays are still on video and need to be transposed.

But I do hope you enjoy the following uploads I have done to you tube. One is of our good friend the great Irish actor and comedian Niall Toibin who headlined many of our fundraising concerts in Harrow and throughout the UK. Here he is in 2006 in St Albans Enjoy ~ Gerry ps watch out for the interview Patrick did with Niall after the concert when he reminisces fondly on his time acting in film and stage in the UK

The occasion was a reception to mark the conclusion of the Easter Rising commemoration programme in Britain .

One Easter Morn  comes from the first hand experience of  Dublin based barrister James Stephen’s notes of the days and nights of Easter Week leading up to the capture and execution of the leaders.

With the use of slide projections compare Gerry Molumby of Triskellion Irish Theatre (aka the Master of Ceremonies on the Mainstage at our Crawley Irish Festivals) set the scene and narrated the show telling the story of Easter Week with live music from Irish Mist with Joe Giltrap on guitar and bodhran and Malcolm Rodgers on fiddle singing the famous ballads now enshrined in Ireland’s music culture of ‘Rebellion’.

One Easter Morn tells the story (prose , poetry ) of the most significant week in recent Irish History; where an ill-fated , poorly planned but determined Insurrection started Ireland’s final push to claim Independence amongst the nations of the world. The story is based on one man’s first-hand experience of the days and nights leading up to the capture and execution of the leaders.
Narrated by Gerry Molumby with slides to set the scene, this if further enhance with the live music of Irish Mist (Joe Giltrap/guitar/bodhran and Malcolm Rodgers/fiddle) singing all the famous ballade now enshrined in Ireland’s music culture of ‘Rebellion’